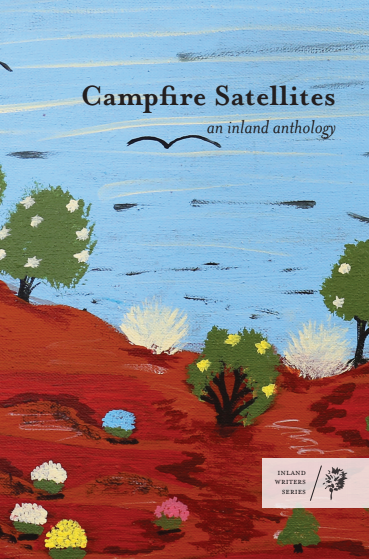 Songlines, highways, coffins, campfire satellites. In this new collection, four inland writers tell stories made by country and about people made by place.

Selected for the Book Supply 2020 by the Indigenous Literacy Foundation.

An important contribution to the literature of place an an intimate, irresistible conversation. These are strong voices, charged in various ways by the particular energy of central Australia. A generous invitation to listen’ — Jennifer Mills

Maureen Jipyiliya Nampijimpa O’Keefe is an artist, writer, artefact maker, storyteller, storykeeper, translator and interpreter. She is a Kaytetye-Warlpiri woman born and raised in Ali-Curung, south-east of Tennant Creek. Her family comes from the Devil’s Marbles area, also known as Karlu Karlu. Maureen’s short stories and poems appear in This Country Anytime Anywhere (IAD Press 2010), Desert Writing (UWA Publishing 2016), ABC Online and in the Red Room’s The Disappearing App. In 2014 Maureen was the recipient of the Magabala Books Australian Indigenous Creators’ Scholarship. She has performed at writers’ festivals across the country.

Gretel Bull is a writer, artist and mother, living and working in Mparntwe/Alice Springs. Influenced by Jungian theory and journeying epics of the Homeric and Aboriginal Dreaming traditions, her work explores the reciprocal influences between history, mythology, person and place. Gretel’s writing experiments with fracturing and rearranging temporal tenses and physical and metaphysical imagery to deconstruct the boundaries between time/space, unconscious/conscious, land/body and past/present. Written following a series of research trips into the Utopia region of central Australia, ‘Highway to Utopia’ examines the post-colonial themes of dispossession, cultural destabilisation and enduring connection to country. Memories of a past tragedy are interwoven with the inanity of the present and the poignancy of place in a philosophical exploration of the utopia/dystopia dichotomy.

Linda Wells, originally from Melbourne, has lived in Central Australia for many years. She is the author of Still A Town Like Alice (2011) commissioned by the Alice Springs Town Council and Kultitja: Memoir of an Outback Schoolteacher (2016). Linda is currently in Melbourne, undertaking a PhD.

Emma Trenorden first moved to Mparntwe/Alice Springs in 2003. She has left multiple times, always returning to the remoteness and quieter life of the red centre. She enjoys finding moments of quiet with a notebook and pen, waiting for a line of a song or poem to make its way onto the page. Emma has a Masters in Creative Arts Therapy and is currently working on a health literacy project with NPY Aboriginal Women’s Council.