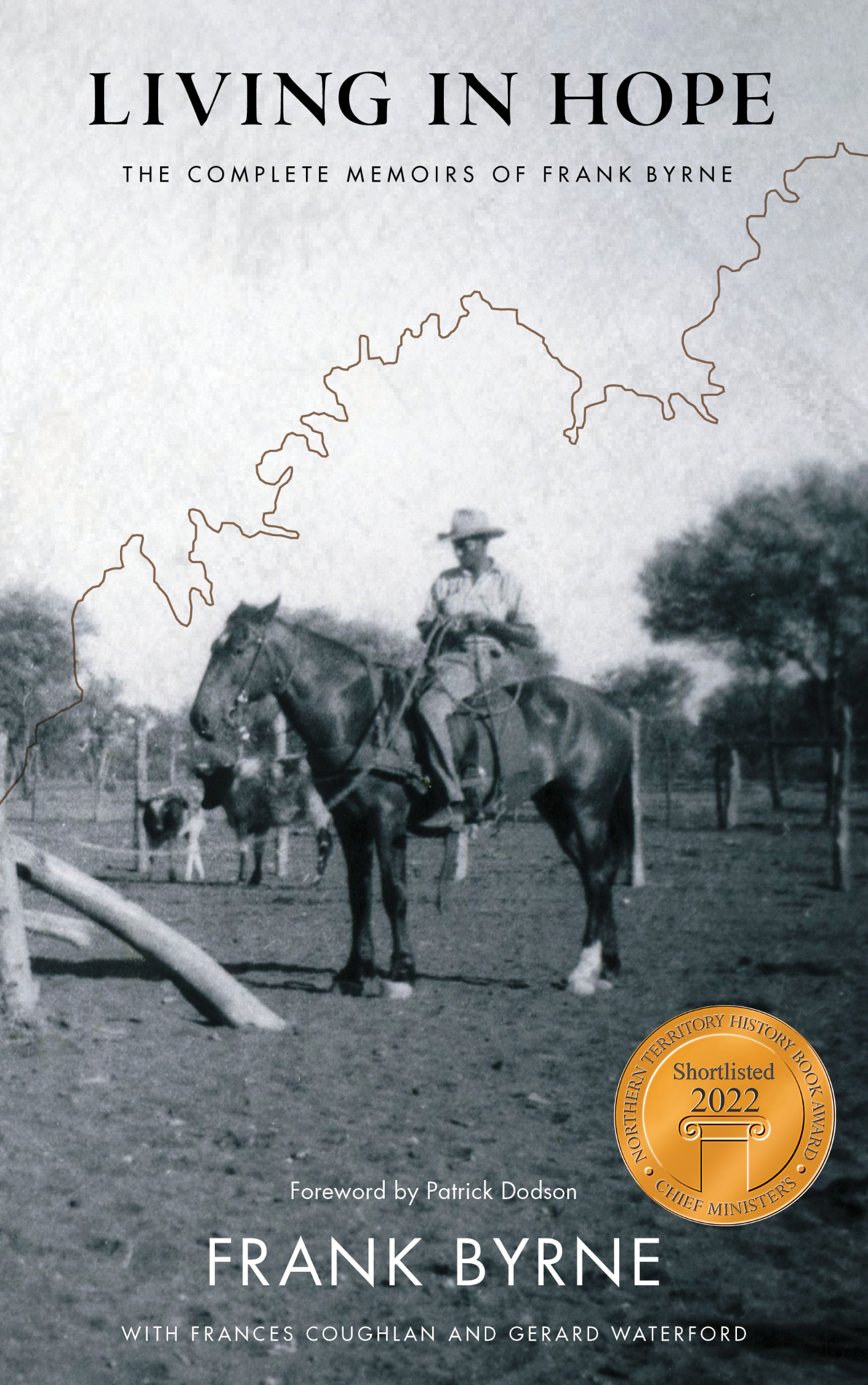 The complete memoirs of Frank Byrne

By Frank Byrne with Frances Coughlan and Gerard Waterford

‘Frank Byrne is a hero who worked for over ten years to have this book written, to set the record straight about the denial of truth in history telling in this country.’ — Alexis Wright

To view the Advance Information Sales Sheet for this title, click here.

In this evocative, at-times heartbreaking memoir, Stolen Generations survivor Frank Byrne recounts his life-long search for his mother. His journey takes him across the Central and Western deserts of Australia to
the Kimberley coast and back. Along the way Frank not only experiences his fair share of struggle but also receives immense loving support. It is the first title in a new truth-telling series by Running Water Community Press.

This edition completes the award-winning extract published in 2017 (ISBN 978-0-6480629-0-5). The extract was showcased at Frankfurt Book Fair in 2019 by the Australian Publishers Association, gathering national and international acclaim. For more information, see this link.

“This is a very strong story of survival. A tragic reminder of the harshness and unfairness of the mission era but also the toughness and determination of our people.” – Bruce Pascoe

“The book has moments of heartbreak, and plenty of hardships, but as its title alludes to – there is hope in there too. A competent storyteller, Frank shares his childhood memories with honesty, humour and a sense of optimism.” – Indigenous X

“Told in simple but powerful language, the story is one that all Australians should read to understand the impact of the Stolen Generations on individual lives.” – Small Press Network

“Living in Hope is an important book in the context of truth-telling. Its significance extends beyond the engaging life story of Mr Frank Byrne: it’s also a revealing account of our recent history and the travails of First Nations people who sustained – yet were dreadfully exploited by – the pastoral industry in northern Australia. I commend this book and its publisher, Running Water Community Press.

Community-controlled publishers like Running Water (and Magabala Books in my hometown, Broome,) have a unique and valuable role because they are prepared to promote the work of First Nations authors who would not get a look-in at major publishing houses.” – Senator Patrick Dodson

“The late Frank Byrne was a storyteller. As a survivor of the Stolen Generations, he saw acutely how the sins of the past were reverberating in the present. He believed that his story, the story of which he was the boss, could be instructive. And that the telling was important.” – Daniel Browning, ABC Radio National

“Living In Hope is a good title, as Frank’s story shows that hope thrives on openness to what is generous and needful in others. This is a memoir of finding things, not just of losing them. I hope it finds a place in the reading of all Australians who are growing up. – Alice Springs News Online

“Frank Byrnes’ story is an extraordinary one – beautifully told; heart wrenching, but without pathos. At the same time, what is a personal story speaks strongly into an historical silence ready to be filled, a literary landscape in need of re-storying. While reports of the treatment of Aboriginal people as a consequence of misguided policy may have emerged in the past twenty years, it is personal life stories that enable us to understand and to empathise. Living in Hope contests the single narrative of this history by fleshing out the life of the child at the centre of it.” – Dani Powell, Director of NT Writers Festival (Mparntwe Alice Springs) 2015-2021

The son of a Gooniyandi woman and Irish stockman, Frank Byrne was born on Christmas Creek Station in the Kimberley on 20 July 1937. He was a child of the Stolen Generations, taken from his mother at the age of six. Frank spent the next nine years at Moola Bulla native station and Beagle Bay mission, and then, when he turned 15, began his working life as a stockman on Birrindudu Station in the Northern Territory.

Frances Coughlan and Gerard Waterford are social workers and counsellors at Central Australian Aboriginal Congress in Mparntwe Alice Springs, and share an interest in assisting people to tell their stories of survival and courage as part of their therapeutic journey. Frank approached them in 2015 to help him finish his life story. Their collaborative work began with a three-week road trip through the Kimberley, retracing Frank’s childhood steps, and meeting with family, friends and fellow Stolen Generations survivors.

Sadly, Frank was diagnosed with cancer shortly after returning from the Kimberley trip. Despite his illness, he continued to work on his book, and he and his writing team completed a full manuscript of his life story shortly before he died.

An extract of the manuscript was published as part of an Inland Writers Series on the imprint Ptilotus Press and was launched by Frank and his family and friends in May 2017. Later that year, he returned to his Country in the Kimberley where he died on 20 October 2017. Frank Byrne is buried beside his mother Maudie Yoorungul in the family graveyard outside Fitzroy Crossing.